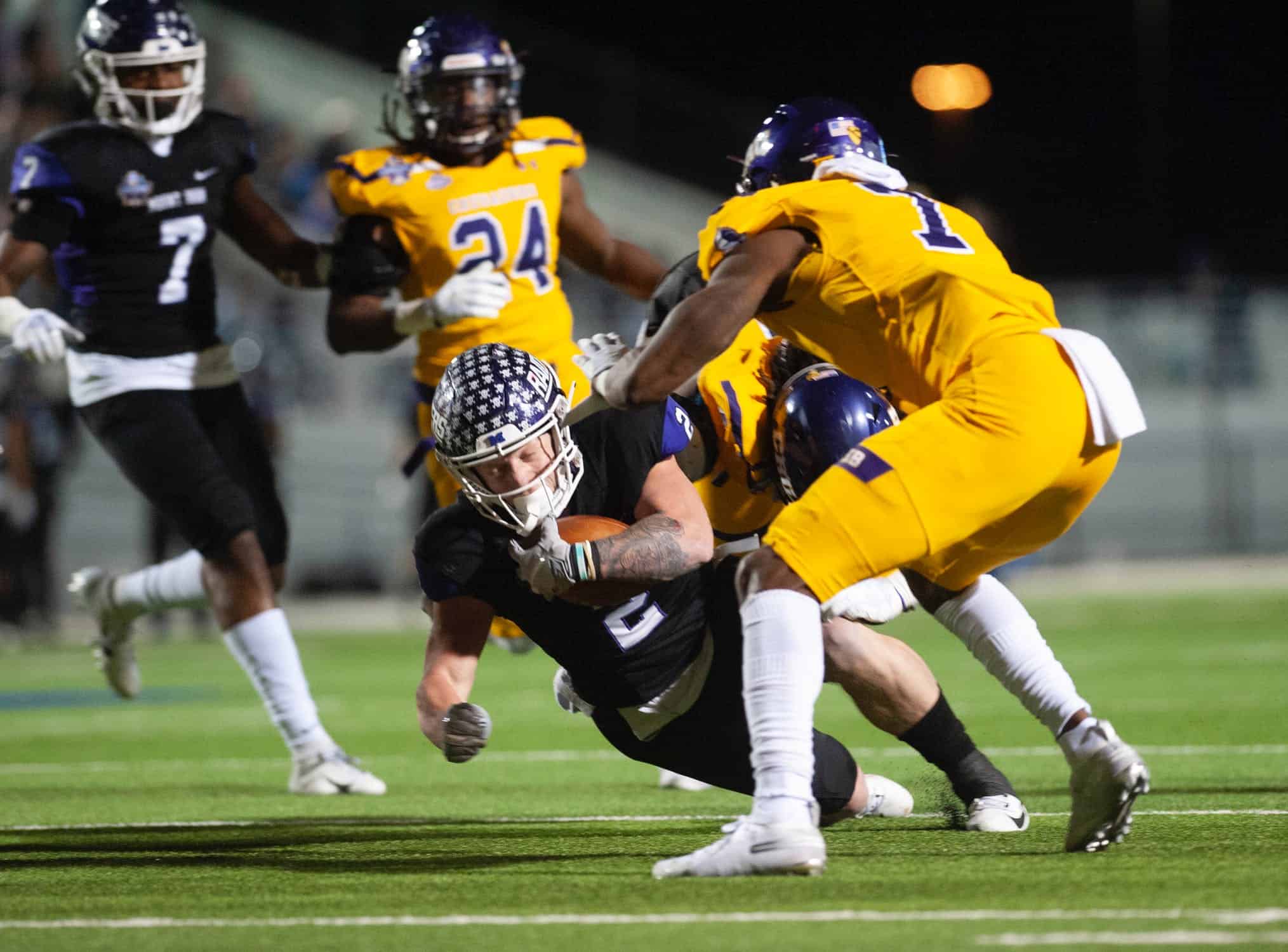 American football is a team sport involving two teams of eleven players who alternate between defence and attack.

The goal of the game is to score points by carrying or throwing the ball to the opposing end zone. To maintain possession, the attacking team must travel at least 10 yards in 4 attempts (called « down »).

At the same time, the defending team must prevent the attack from achieving this objective, in order to regain possession of the ball.

The winner is the team with the most points at the end of the game.

In the United States and Canada, this sport is known simply as football.

How long does a game last?

A meeting is divided into four quarters of 15 minutes of effective time. The halftime lasts 20 minutes (halftime during which the famous concert takes place during the Super Bowl). In all, a game lasts about 3 hours!

What is the principle of an American football match?

The attacking team tries to place the ball in the end zone.

11 players per team on the field and a maximum of 53 players with 30 attack players and 20 defence players.

How are the players positioned?

How big is a field?

An American football field is marked by lines spaced 10 yards apart, for a total of 100 yards long (1 yard = 91 centimetres). The two end zones at each end are also added and posts are planted on the outside line of each end zone.

How do you place the ball in the end zone?

This is one of the main characteristics of American football. When a team is in possession of the ball, it has 4 attempts (or downs) to advance at least 10 yards without being tackled. If the four attempts fail, the ball changes hands.

How do you score points?

When an attacker tackles the ball in the end zone, his team wins 6 points. This is called a touchdown. An additional point is awarded, much like in rugby, if a player passes the ball between the poles after a kick. Another possibility is to replay an attack and win two points in case of a new touchdown. Note that if the defence intercepts a ball, it may possibly attempt the touchdown directly.

Another possibility to score points without touchdown: kick the ball between the poles. Generally, a team does not wait until it has failed in its 4 attempts to move forward and kicks after 3 failures. If the ball passes between the poles, it’s three points!

Finally, you can score points by defending by tackling the quarterback in your own end zone (2 points).

In attack, to simplify, there are 4 categories of players:
– QuarterBack: the game leader who decides the strategy (race, pass, etc…),
– Running-Backs: runners who advance with the ball in their hands,
– Wide-Receivers: receivers who run forward without a ball to receive a pass and then continue running if possible,
– Blockers (center, tackles, guards): the « big guys » who protect the QB while he is passing and who open « gaps » in the middle of the defenders or block them to allow the runners to « pass ». A blocker called « Tight End », more mobile and able to block or receive short passes, is increasingly used.

Each player therefore has a role to play in the tactics chosen by the QB (block, trajectory, etc…). They must therefore all know hundreds of strategies learned by heart and announced by the QB at the time of the huddle (rapid grouping before the action).

In defense, there are the « opposite » positions, also in 4 categories:
– Tackles: the heavy tacklers in charge of stopping the opposing riders (RB) very early, or even tackling the QB,
– LineBackers: the faster and more mobile tackleers in charge of tackling the RBs in « second curtain », tackling the QB or the receivers on short passes,
– CornerBacks: « Interceptors » trying to catch the balls intended for the receivers or to tackle them after a pass reception,
– Safeties: backstands used as the last defenders on passes or races.

It is a matter of winning ground with each action to take the ball to the opponent’s goal. To score a Touchdown (which earns 6 points), there is no need to « flatten » the ball, it just has to pass the axis of the goal line or it has to be in the hands of a player putting BOTH feet in the goal.

There are two ways to move the ball forward:

– Either it is carried by a runner or the quarterback until it is tackled or taken off the field.
– Either he is thrown forward to a catcher who catches him and then runs with him until he tackles or leaves the field. Only one pass is allowed per « down » and must be launched behind the scrimmage line (see below).

Back passes (i.e. backwards or on the « lateral » axis of the field) are allowed at will but are rarely used because they are too risky.

In attack, a team has 4 attempts (« Downs ») to win 10 yards. Each attempt corresponds to a run or pass action. If the team succeeds, it benefits from another series of 4 attempts, and so on throughout its offensive sequence until the opponent’s goal.

In practice, the attack usually tries to achieve this in 3 attempts, because if it fails after the 4th, the opposing team recovers the ball from the place where the attack was stopped, so « too close » to its own goal.
The 4th attempt is therefore very often played differently: if the attack is close enough to the opponents’ posts (50 yards maxi), it attempts a 3-point kick (Field Goal), if it is too far away, it is cleared by a… clearance (Punt), which the defense will restart in the race in the opposite direction as far as possible and then start attacking as close as possible to the opponent’s goal.

At the beginning of each action, the ball is always refocused on the field and repositioned at the last « stop » (location of the tackle or exit). The boundary to be reached is indicated by a mark on the ground and a hand-held sign (red or orange) on the edges of the field.

The virtual starting line of the action (at the previous « stop » level) is called the scrimmage line.
At each down, the attack and defense players line up on either side of this line, must remain motionless (except authorized recessed players), and the action starts with the snap, the famous pass between the legs of the Center to the Quarterback.

The defense, for its part, tries to prevent the attack from moving forward by tackling the ball carriers, or even by recovering the ball directly, in two ways:
– by intercepting a pass,
– by causing a « fumble ». This is a loss of ball following a tackle (you will see that defenders, when possible, always try to tackle by « tearing off » the carrier’s arms or the ball).
These two actions are always important moments in a game.
When the ball changes hands, the teams switch between attack and defence and the action starts again in the opposite direction at the place of the last « stop ».

Only the ball carrier can be tackled. The other attacking players can only be blocked, and only from the front and open hands (so not grabbed).
patriots-jets2

If a runner is tackled behind the scrimmage line (start line), it will be a loss of ground and therefore a greater distance to run in the next action. If it is the QB that is tackled, it is called a Sack, the preferred action of tackles and linebackers (with fumble provocations).

The transformation of a touchdown (which proceeds like a field-goal) earns 1 point. If necessary, the team can choose to try a 2-point transformation: to do this, you must score a 2nd touchdown « by hand » (pass or run).

There is another way to score 2 points, but quite rare: safety. To do this, an attacking player must be tackled in his goal, the ball carrier or a fumble must come out of the goal, or an attacking foul must be committed in the goal.

Finally, but it is very rare or even exceptional, a player can try a drop (as in rugby) by kicking the ball between the posts, after a rebound on the ground. It brings back 3 points (never seen for my part!).

The many referees on the field report offences (irregularities, violence, etc…) by throwing a yellow « handkerchief » towards the place of the offence. The offending team is sanctioned by a loss of ground or new downs offered to the opposing team.
bad-call

The NFL (National League Football) season takes place in the « autumn » period. It starts in mid-August (pre-season « friendly »), to really start at the beginning of September, and continues until January for the best teams qualified in the final phases, then ends in early February with the famous Superbowl, the NFL final, financially inaccessible for the average person! 😉
In New York, two teams, the famous Giants (4 titles) and the slightly lesser known Jets (1 title).
Otherwise, if you move away from New York, you have the Philadelphia Eagles, Baltimore Ravens, Washington Redskins and Buffalo Bills (45 minutes from Niagara Falls) and the New England Patriots (Boston).

These are at the very least simplified rules. No real way to do with less.